Why EBITDA can be hazardous to your health (Part Deux): Application to Valeant

In my previous blog I discussed EBITDA and how different it from operating cash flows.  Some of the comments that I got were that this is a made-up example. In all fairness, it is a somewhat synthetic example (though the idea was based on a real company, General Motors, circa late eighties).  So the question is what would happen had we looked at the company that starred in my first post, Valeant.

These are the numbers reported by Valeant:

Charting this over time yields the following graph: 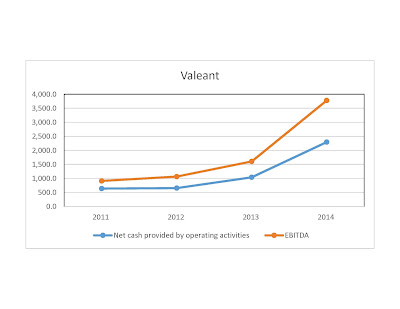 As we can see, the two series are not the same.  Moreover, EBITDA is always larger than operating cash flows.  Finally, the two series become more and more divergent over time.

The implication of this is that if we valued (foolishly) companies based on some EBITDA multiples (say, EV/EBITDA) then what we would get is a valuation that has nothing to do with discounted free cash flows or residual income valuations.

A possible criticism of this exercise is to say that one observations is not a representative statistical sample.  This is true of course.  So let's take a look at another company, Microsoft. 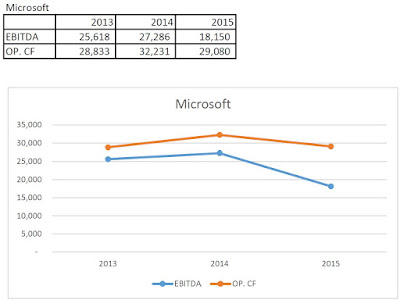 What this graph shows that for Microsoft the two series, like Valeant, are different and diverging over time.  The big difference is that in Microsoft operating cash flows are larger than EBITDA while for Valeant it is the other way around.

If you still do not accept my conclusion, based on the premise that also two companies is not a large enough sample,  I would challenge you to find a large sample of companies where EBITDA and operating cash flows are the same. I am willing to bet that this will not happen.
Posted by Unknown at 13:44

The Accounting Art of War