Earlier yesterday I  was on BNN to talk about Valeant's alleged accounting manipulation (http://www.bnn.ca/Video/player.aspx?vid=736200).  Valeant is the result of a merger between Biovail and Valeant, both of them had an accounting scandal in their history.  I actually use Biovail as a case in my courses as an example of revenue manipulation, so one could argue that there is genetic tendency there.
The story here is whether Valeant has created specialized drug companies (remember Special Purpose Entities or SPE's in Enron) to book fictitious revenues. The company claims that it consolidated them, which could refute this claim.  If this is true my question is why would employees of Valeant use pseudonymous like Peter Parker (seriously?) or Jack Reacher in emails from Philidor, one of such companies created by Valeant?
When one goes beyond simplistic heuristics and uses the Beneish Manipulation Index analysis (below) we can see that while the overall probability is between 1% and 2% (not so low as you'd think) the first index is highly suspicious:

Thus, when I looked at the growth in sales vs. receivables I got:

The same occurred when I looked at quarterly data:

When I charted Valeant's quarterly accounts receivables and sales I got the following stunning result: 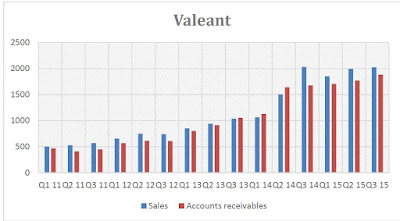 The sales in each quarter from 2011 and the receivables are almost the same.  As a matter of fact the correlation between the two series is 98%.

What can we conclude?
That the overall probability of earnings management is inconclusive but there are red flags with respect to the revenue recognized by Valeant.
BNN - Watch TV Online | Elitzur: Valeant's accounting practices highly suspicious
Posted by Unknown at 13:48

The Accounting Art of War